I visited the first Musician's Planet musical instrument fair in Stockholm two years ago. After missing last years event I decided to pay it a new visit this year to see what it had to offer this time. Since the first occasion it was held it has moved from the rather more central Münchenbryggeriet to the large Stockholm Fair in Älvsjö, albeit in one of the smaller of the halls.

When I arrived, among the multitude of visitors heading for other events such as the home, children and chocolates fair (all drawing much larger crowds) it was quite apparent that not much had changed. At the fair two years ago, the booth arranged by Stockholm music store Jam, was one of the few interesting parts, and it would turn out that their (this time much smaller booth, rather a table than a booth really) was one of the few highs of this years event. 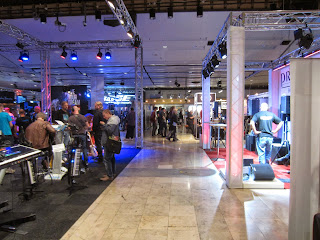 All in all the majority of exhibitors presented painfully predictable products and the level of technical innovation did little to impress. Booths like the one presented by Genelec could just as well had been the booth of some insurance company or obscure lobbying organization. The big guys was represented by Roland, which was about as interesting as could be expected (not, that is) and Yamaha. Both of these was dominated by the predictable selection of digital pianos and drum sets. 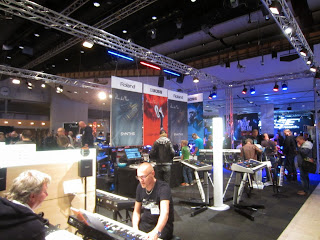 Clavia had a place in one of the bigger music store booths (4Sound, if I'm not mistaken) with the Nordlead 4 and the Norddrum 2 present. 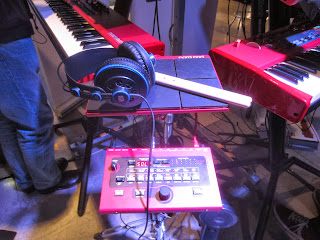 The Fitzpatrick booth had a grand selection of Moogs. Among the things on display were the newly announced minimooger pedals. I don't know if these were prototypes or the real deal, but they did look a bit cheap in finish compared to other Moog gear. The most interesting of the series, the delay, was not on display. 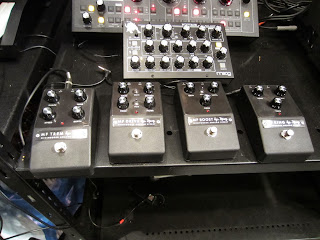 Moog also had one of the 30 gold Voyagers on display, which probably was one of the more photographed exhibits at the fair. 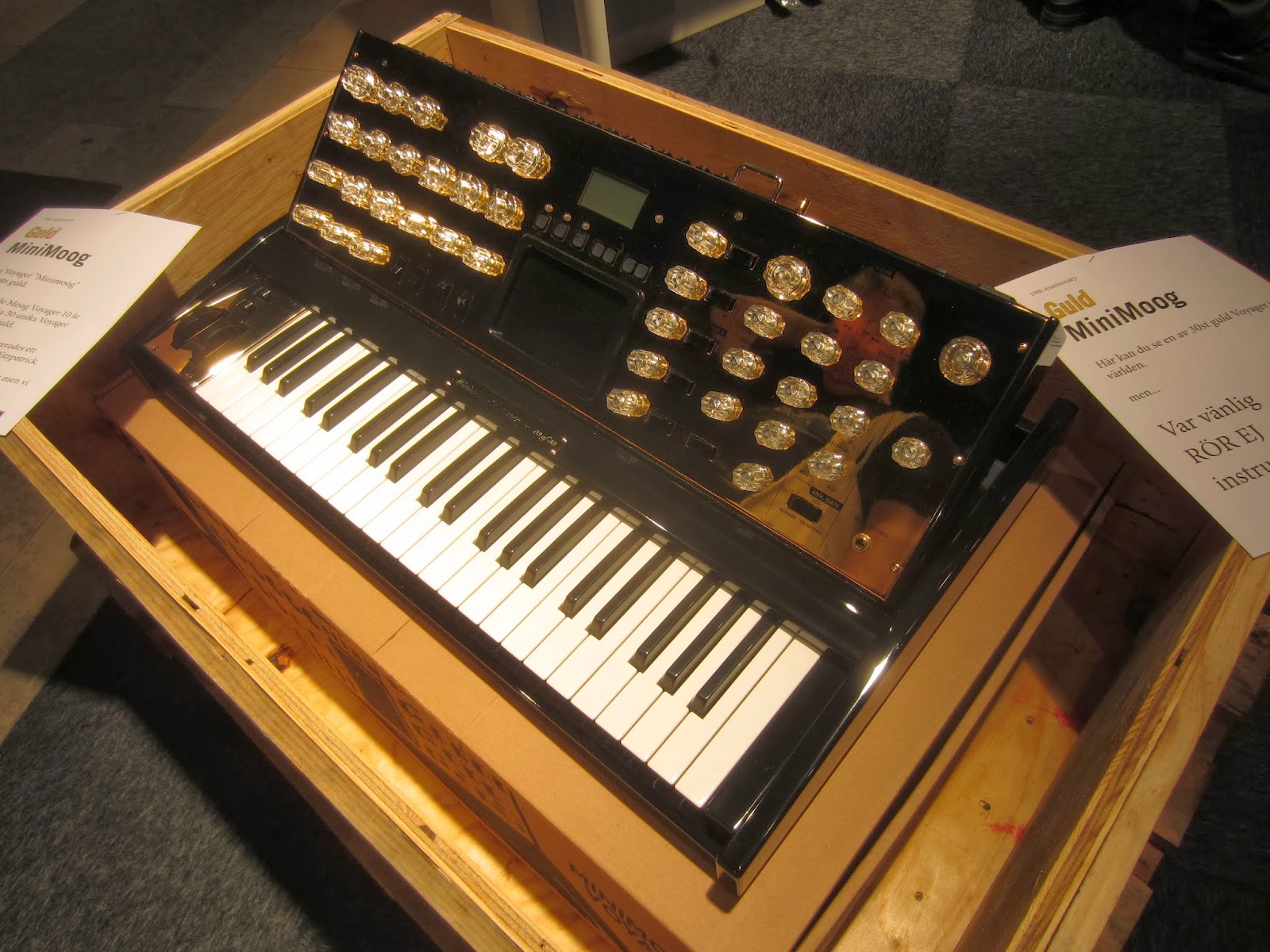 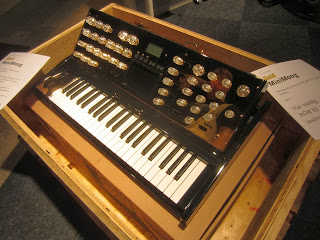 One more interesting booth was the one by Stockholm pedal/guitar store These Go To 11. They had a vast selection of pedals on display. 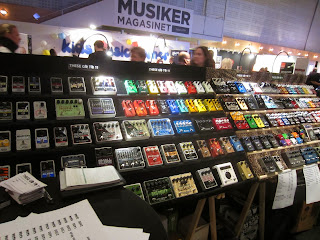 I did discover the Catalinbread brand that I hadn't heard of before. Their Echorec emulation pedaled seemed interesting for example. These Go To 11 had special fair prices on some of the pedals but not all. (One weird thing about this fair is it's reluctancy to offer things for sale. It is a fair geared towards the public, but is set up like a fair for representatives from the business.) 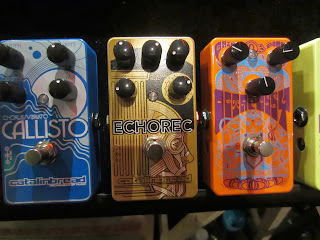 Then of course there was the most interesting table, the one hosted by Jam, that also housed modular on-line store Escape From Noise, german pedal/module producer Koma Elektronik and swedish gear manufacturer Teenage Engineering. All of these were present on one table. Jam had brought an Analogue Solutions Vostok Deluxe and a 9U eurorack with modules from Ananlogue Solutions and Malekko among others. These were hooked up to an array of Koma Elektronik pedals, and what was probably the crowd pleaser or novelty piece of the fair, the Kommander. (It was quite interesting to watch the reactions to passersby when they saw different synth noises being triggered in the air from this little device. The novelty effect of this seems to be just as great in this day and age of Wii and Xbox Kinect as it was when Lev Theremin introduced his instrument in the first half of the 20th century.) 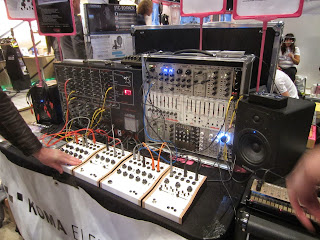 Jam also had one of each of the Korg (who didn't have a booth of their own) Volca series on display (as far as I know it's the first time they've made a public appearance in Sweden. The Volcas are as yet not available to buy here. Since I have two of them on pre-order with Jam (the Beats and the Keys) it was nice to finally get to see them in the flesh. Can't wait to get mine, but will probably have to wait at least a month, probably more. 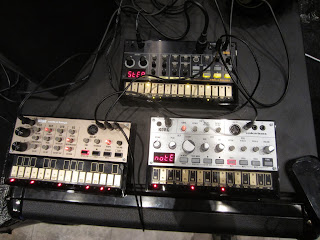 On the other side of the table Escape From Noise had a rather substantial eurorack setup containing modules from Mutable Instruments, Make Noise, Metasonix and a whole bunch more. One piece that was particularly interesting was the Micromac module from Macbeth. Despite it's high price, it's probably the most bargain oriented module from Macbeth so far. 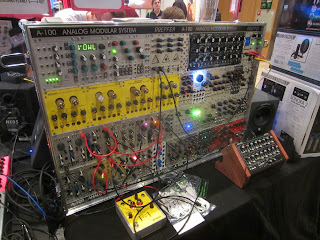 So alla in all I spent a couple of pleasant hour at Muscian's Planet this year. It's a fair that needs to think about who it's geared towards a bit. It would be nice with a wider selection of smaller more edgy exhibitors. I also think it would be a good idea to encourage the exhibitors to have more items on sale. I didn't buy anything at the fair, but seeing the Koma Elektronik Kommander in action made me order one, that I picked up from Escape From Noise today.
Posted by Monofonen at 22:40