In the early 70's quite a few of the new compact integrated new synthesizers available on the market were designed to be put on top of an organ, hence got the controls placed under the keyboard in stead of above it as has since become the norm. One of these monosynths were the Compac Synth by the Italian manufacturer Crumar. Crumar is probably best known for the Bob Moog designed Spirit from the early 80's and the BIT-series of polysynths from around the same era. Maybe not big hits in the synth world, but at least minor successes of design in their own right. The Compac however did not maker much of a dent in the market. 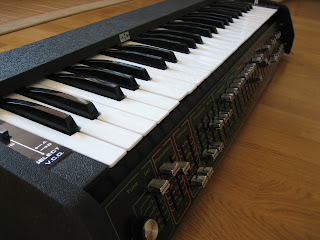 The information available on the Compac is scarce to say the least. I bought mine from a second hand music dealer who mainly focused on antique string instruments in the early 90's for 250 Swedish kronas (roughly 30 euros or 25 pounds). It was the first real synth I owned and quite a temperamental beast. 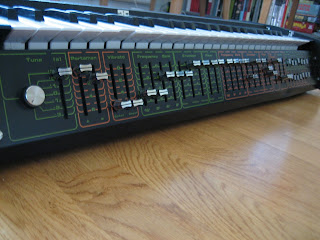 The architecture of the Compac is a bit unusual in that it has two separate voices, playable simultaneously or split in two zones on the keyboard. Each has it's own oscillator, filter and AR envelope. Separate outputs are also available. Sounds quite good for 1973/74, right? 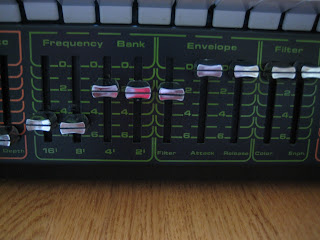 Well, in the case of the one I have, not so much. The two voices have two separate controls for tuning, and unfortunately I was never able to get them to align tunewise. Also, there was no form of external control available. Anyway, I used it quite a lot right after I bought it. And I remember doing one great recording running it through a Boss HM-2 Heavy Metal pedal. Then it fell into disuse. 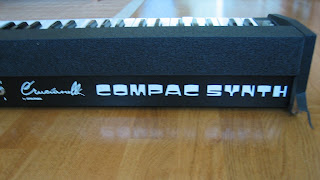 Nowadays my Compac is not in such a good shape. One of the voices has gone totally and the other one doesn't track very well across the keyboard. I did open it up to try to see what could be done, but quite soon realised my knowledge wasn't quite up there with what was needed to fix this one. 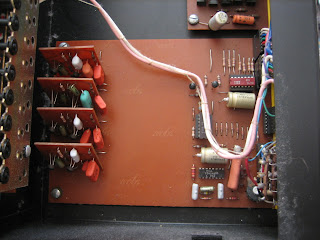 So now the Compac sits among my other gear, without seeing much action unfortunately. As an eye catcher of the more funky kind it still does it's job admirably though. 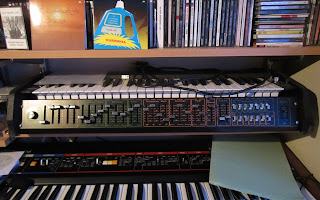 Any source for service manual or guide?

Hi
I live in France and I'm a great fan of Crumar Keys... I own a Stringman, a DS2, a T1, and a T2... Do you sell your Compacsynth..?
Thanks
Benjamin
elysian.beal@club-internet.fr

Hi
I live in France and I'm a great fan of Crumar Keys... I own a Stringman, a DS2, a T1, and a T2... Do you sell your Compacsynth..?
Thanks
Benjamin
elysian.beal@club-internet.fr

Sorry, I haven't replied to your comments. Had managed to miss it somehow. Will probably hang on to the Crumar for a bit longer. No idea where to get a service manual I'm afraid, but would be very interested in one if you've had any luck in your searches.

Thanks very much - I have a friend that is trying to fix one up. He could use help locating the termination point of a disconnected wire if that's okay? Just a related photo exchange should work? It would be a big help as there is virtually 'zero' information out there...

The SAJ110 is a 7 stage counter made for organs. Add an R-2R resistor network and it synthesizes sawtooths (stair stepped) ... add filtering and it smooths out the steps. The 4046 (phase lock loop with built in VCO) likely drives the SAJ110 to give a voltage controlled sawtooth etc.

The 4046 is the old 'A' series part and should be replaced with the 'B' series (but keep the originals just in case there's a quirky difference and keep parts and handling static free!)

Other issues visible in the same synth, corrosion on the IC legs & socket, due to dissimilar metals.

Hi, got the schematic in case you want to fix your unit up? As I mentioned previously - mostly transistor except for the CMOS 4046 PLL VCO used as the tone source, a TTL divider chip and another divider chip. The keyboard tuning is done for each note via two variable resistance networks (for each key) which feed their respective VCO's. The rest is a Moog Ladder Filter (-24dB low pass) and transistor circuits for the various other bits...It's all times two and powered by a +12V and -9V DC supply. Let me know if you're interested...

I just finished a complete album with this weird & wonderful, but broken synth: https://danielenglisch.bandcamp.com/album/heading-for-planet-crumar
Would love to get it fixed as well. Would you be so kind to share the schematics as a download mr e man?

Excellent Album - no doubt the first of it's kind to feature the Compac Synth... will follow-up

Thank you so much for the Schematics and the kind words e man! Now let's get my completely detuned Compac fixed soon :) Food for a new album together with the polyphonic Crumar Brass wich I just received. Happy new year to all here!

Glad to help, already had some good exchanges with Dennis.

The tuning should be interesting.... two potentiometers for each note and the VCO's are a bit unorthodox, though seemingly sound good - Tuning should be an interesting exercise, hopefully the pitch will stay stable throughout the tuning process!

If you plan on changing the PLL VCO chips from the older 'A' series to modern'B' series CMOS, make sure you don't tune until then...changes from the A to the B series might be present....basic stuff that Danniel would know, but doesn't hurt to point out.

If this excellent album is any indication - be great to hear what you can do with a fully working Compac Synth ; )

It's nice to hear Another Compacsynth acting the same way :) Recognizing the filter (I've had mine for 8 years, my first analog).

Wanting to fix mine, but i dont make a lot of Money and information about these are so rare.

What type of tune knob do you have Daniel? What about you Eman?

Im very much interested in fixing this one, and if theres a way to implement some kind of CV key Control, that would be rad!

Likely no way to do CV control as is, you would have to modify the 4046 VCO circuit to be something like this...
http://www.birthofasynth.com/Thomas_Henry/Pages/X-4046.html

You would also have to modify the keyboard networks to give the proper octave per volt feed to the VCO. strictly speaking, you would only need the first schematic page of the 4046 VCO as the second is wave shape & buffering... even gives you Hard Sync and the other nice waves.

... thought about it some more, you might be able to sequence via uncalibrated analog sequencer, where you set arbitrary voltages corresponding to the untuned VCO. It would require some DIY customization and retrofit to be compatible, also only working with the Gate triggerable notes. Again, 'in theory' so no guarentee's

Hi
Do you still have your compacsynth?
I live in France and I'm a great fan of Crumar Keys... I own a Stringman, a DS2, a T1, and a T2... Do you sell it..?
Thanks
Benjamin
elysian.beal@club-internet.fr

Hi Benjamin
I actually got this as a gift from the first owner who was doing a lot of work for tv and movies in the 70's and 80's which I'm very grateful for. The album I did was made in one week and many things were not working as it should and the tuning was (and still is) completely off. It was an absolute joy to create the album by pushing the boundaries / to make it work, I thought I could only borrow it for a week, so went crazy on this and created an album. When it was finished I called the composer to bring it back and he said "keep it, I'm happy you take so much joy out of it!". Again I'm very grateful and I am keeping it of course. I also got the Compac Brass now. They still need to be serviced to the max to retreive their original silky Italian full potential. There have been some quick fixes, but to get it back to the original state, I guess we (Matana that is) have to take it apart completely and rebuild it ;)
Have a great evening!
Daniel

And E Man thank you so much for the extra info! :)