A couple of weeks ago Dominick Fernow's Vatican Shadow headlined an event arranged by Ideal recordings and Konspirationen at the legendary electronic music venue Fylkingen in Stockholm. The VS gig was part of Fernow's current European and American tour. The other acts playing was Joachim Nordwall, Diskrepant and Dungeon Acid. I was supposed to spend the evening dressed in black tie at my father in laws rather fancy gentlemen's club, but that got cancelled in the last minute and I was able to head of to Fylkingen instead.

The first act out was Ideal owner Joachim Nordwall with a twenty minute barrage of analogue drones. The venue was pitch dark, only intermittently lit by a strobe set at a the lowest possible speed. Then Diskrepant presented a drone set of about the same length. While Nordwall seems to use synthesizers as the main sound source, Diskrepant works with contact microphones and effect boxes as his source material. The result is somewhat less confrontational, leaning more towards the meditative side of drone and dark ambient. Both sets were good, immersing affairs, making you feel slightly dazed afterwards. 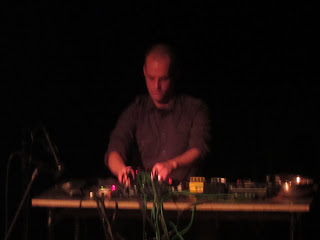 The next act out was Jean-Louis Huhta's Dungeon Acid. I've seen DA live once before, at a similar event at Fylkingen in 2010. That was a good one, but this was even better. DA's music could be described as acid techno that blends industrial electronics with classic Detroit vibes. The set played this evening stretched for an hour of non stop beats, but never got boring. Huhta produces some of the most interesting stuff in this genre today. I picked up his latest cassette release "Bliss" at the show. Although a bit calmer and laidback than the music produced live it's well worth checking out. 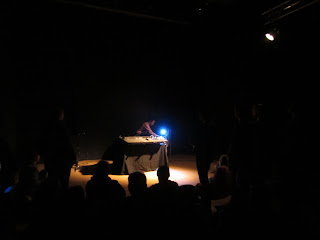 Then it was finally time for Vatican Shadow. Visually Fernow presented a rather toned down affair, the only thing representing the religious war theme of the project was the American desert style military jacket he put on for the show. At the beginning of the gig Fernow looked much like the other acts, a man crouched over a table full of electronics, but as the music progressed and got more aggressive, so did his movements culminating in spasmatic convulsions, marching and shadow boxing, producing a spray of sweat a couple of meters around him. 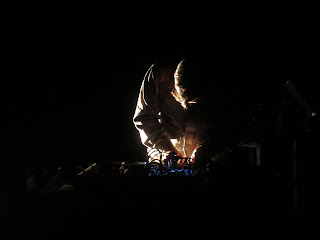 The music presented at the 40 minute set brought Vatican Shadow releases such as "September Cell", "Operation Neptune Sword" and the Modern Love album "Ornamented Walls" (that includes ONS) to mind. In other words more distorted and aggressive than some other releases from the project, even though there were quieter parts of the show as well. When the gig finished I ran stunned to the underground to catch a train. Vatican Shadow is surely one of the most interesting projects in the dark techno post-industrial scene right now.
Posted by Monofonen at 12:32