About two and a half years ago (I think) I bought a second hand Drumstation for 500 SEK, and was quite pleased with my bargain. But when I plugged it in it turned out the knobs didn't work on it. Well, except for the main volume one. Everything else seemed to be fine with it, it was just the editing part that wasn't there. I went back to the store where I bought it and managed to get them to lower the price to 300 SEK. At the time I was just beginning to set up a hardware studio again after years in the software realm, so I thought it at least would give me some basic drums until I could afford some better ones.

Fast forward to now, and I have two borrowed drum machines in my studio (a Sequential TOM and a Yamaha RX-5) but no easy editable ones. I have been pondering getting rid of the Drumstation for a while and was googling it out of pure chance tonight when I stumbled upon a thread in the Gearslutz forum. It was about people with Drumstation problems very similar to mine. The last entry, made very recently, got me intrigued. The user laitos had apparently the exact same problem as me and had managed to fix it by just changing one contact between the two PCB:s. Sounded to good to be true, but I thought what the heck, might just as well try it, since it isn't worth much half functioning anyway.

So I opened it up and located the the single green wire that was supposed to be the culprit. Indeed the contact seemed to be a bit oxidized. First I tried to clean it but that didn't make any change, so I simply cut it, peeled the wire (as laitos suggested) and wrapped it around the screw before fastening it again. I plugged in the Drumstation and, lo and behold, it's working perfectly. A ten minute repair job, with no new material needed, made my Drumstation, serial nr 107, as good as new. 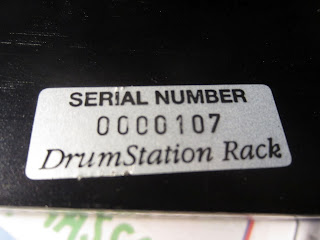 The user laitos over at Gearslutz didn't provide any picture, and asked anybody else trying the procedure to take some, so I thought I'd put some up here to help others in the same situation locate the wire. The troublesome wire contact is located to the left of the Drumstation (looking at it from the rear) on the  PCB just behind the Congas section. 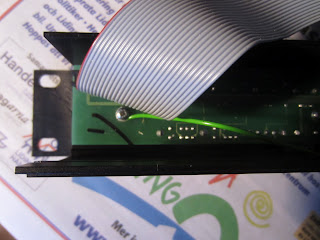 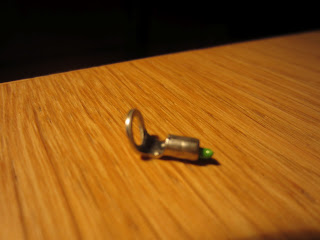 It seems there are other varieties of the ailing knobs on the Drumstation and this will most likely not be a solution for everybody. In the thread over at Gearslutz there was some who had trouble with all of the pots, including the master volume one. So tread carefully, I take no responsibility whatsoever for this method. Anyway I got a bit excited about having a working Drumstation and quickly recorded this:

Worked for me! thanks man!

Worked for me also - volume pot was also broke and it fixed that too.

that wire probably represents a ground rail shared by the 2 pcbs. failed contact would cause the front pcb pots to have no gnds and hence to be totally non-functional.

Just got one of these and same problem, none of the knobs including volume worked. Tried this fix not expecting it to work and it WORKED! GOOD JOB!